“Why do you want to be a writer?” I have been asked this question more times than I can recall, but I’ve always had to answer quickly. I’m so thankful to have escape these situations unscathed that I forget them and move on. I never stop and think about it, and I mean really think. That may sound strange coming from a creative writing major, but how much did you know about your future at eighteen? (If your plan worked out, kudos to you! Honestly, kudos!)

With that said, I wanted to take a time out and ponder the question. Why do I want to be a writer? ….

I can’t tell you how many times I’ve heard, “I was born to be a writer,” “I eat, sleep, and breathe writing,” or, “I’d die if I couldn’t write.” Well, not me. In fact, I say that’s crap. You eat food and breath oxygen, not writing; you wouldn’t die without it, and you were born, but probably not to be a writer. (Career destiny? I doubt it.)

I don’t mean to offend anyone or belittle their aspirations. I want to be a writer. I have no second thoughts about that, but realistically, if I never publish anything my life will go on, and because the world will keep turning, so will yours. Make no mistake, I will be incredibly disappointed, but I’ll make my peace with it and write for myself.

But like I said, I want to be a writer so Why? Where did it come from?

The first thing I ever wanted to be was a country music singer; basically, I wanted to be Reba McEntire. I wanted to sing songs that made people think and feel, but more importantly, I wanted to write those songs myself. I spent a long time trying to write one good song, sometimes I still try, but I’m terrible at it. When I gave up that dream, I thought I would be a musician, a guitarist. If I couldn’t write the songs, I could rip a solo on them and make people feel through the music, and maybe, just maybe I could help co-write songs with my future bandmates. As it turns out, I’m also a terrible musician. (I still try, but I’m a realist and it’s just not happening.)

So what happened next? How did the pattern continue?

High school. Junior English with Mrs. Parkison. That’s what happened. To be honest, I don’t remember the assignment topic, but I remember having to write some type of personal essay and while my classmates were whining about the page length, I was already working away, happy as a clam. The specifics of that essay have been lost over the last seven years. I know it was honest and discussed my relationship with my dad, but beyond that, I’ve forgotten. I have not forgotten, however, what happened the day the assignment was returned to me.

Mrs. Parkison kept me after class, a class that I had chatted my way through. Oh God! What did she hear me say?
But I wasn’t in trouble, I was being rewarded.
What the hell is happening right now?
She pulled my essay out of her desk drawer and handed it to me, an essay that wasn’t due back to us for another two days. I looked at the front page. There was no grade, no red marks, not even green.

“No, if anything, you should expand it, but you don’t have to for class. I just wanted to tell you that for a student who hates English, you’ve got a real knack for words. This is very good. You should be proud.”

I was dumbfounded. I didn’t really know what to say. I had fought through boredom and struggled my way through every English class I’d ever had. My favorite subject, besides music, was Math. I liked the concreteness of math. (2+2 = 4, not, “Well, if you count the points on the 2s, the numbers could really be saying six, we’ll never really know.”) I liked completing an equation and getting it right; I liked just knowing there was a right and a wrong answer. Math was methodical, structured. I needed it. I understood it. I thought English was guess work. Students were pulling things out of thin air and if the teacher thought they were clever, they got an A, at least that’s what I thought. I was 17, almost 18, and to just then be told that I had a “knack for words” was both exciting and annoying. I liked doing well in school and having the respect of my teachers, so it was nice to be complimented, but I preferred going unnoticed in English. The annoyed part of me came from thinking I was going to have to compete with that essay for the rest of the semester if I wanted to keep my 3.8 GPA (*cough* gym. *cough*)

For a while, I was mad at myself for not just writing something sufficient, but in the back of my mind, I lingered on the one note that she’d written on my essay. Walking out of her classroom, I flipped to the last page looking for notes or a grade, expecting a B+ this time. 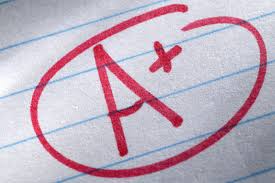 “A+ I cried while reading this.”

My words made her cry? They made her cry. That was it, I did it. I couldn’t sing, I couldn’t write songs, I couldn’t play guitar, but I could write. That was my outlet. I don’t know why I didn’t figure it out before then; I’d been writing short stories since I learned to squiggle on the page. I guess I was blinded by music. (Who doesn’t want to be a rockstar?)

Because at a time when I felt completely misunderstood, when I was working and worried about money, when I couldn’t relate to anyone my age and was in desperate need of an outlet, writing fell into my lap. No, writing slapped me in the face and yelled WAKE UP! I was always different. From the time I developed a personality until this very day, I have been a bit of an outcast. I can blend in well enough in most social situations, I don’t “stick out like a sore thumb,” but inside, I feel different, out of place. When I write something and someone gets it, I feel like they get me. I feel understood and I feel like maybe someone like me might find something I’ve written and feel understood, too. That is why I want to be a writer.

2 thoughts on “The Literary Calling – Why Do You Want to be a Writer?”